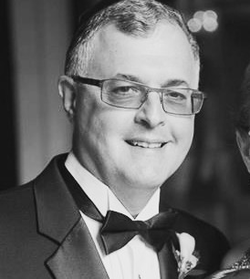 Jason W. Manne is an attorney who handles Board for Correction of Military Records matters and related appeals to the Court of Federal Claims. This includes military disability retirement claims, combat-related special compensation claims, and requests for discharge upgrades.  He also handles VA benefits appeals to the Court of Appeals for Veterans Claims.
​
At the top of this web page you will see a photograph containing the phrase "eternal vigilance is the price of liberty." This quote is often associated with Thomas Jefferson, although its origin is unclear. The phrase is engraved into the Guardianship statute located by the National Archives in Washington D.C and that is where the photograph above was taken. It's a good quote because it summarizes the role of lawyers in a free society.

Jason supervised the Pitt Law Veterans Practicum's clinical program as an Adjunct Professor of Law from March 2014 to May 2019.  In this capacity, he filed more than thirty cases with the service discharge review boards and the boards for correction of military records.  He won more than a dozen of these cases including one case where a bad conduct discharge was upgraded to a general discharge.  Jason also won the McCord case in the Court of Federal Claims which held that veterans can recover out-of-pocket health insurance premiums when they are awarded a military disability retirement.  The Court of Appeals for the Federal Circuit subsequently held that veterans can also be awarded their out-of-pocket medical expenses without resorting to the cumbersome Tricare retroactive claims process when they successfully pursue a military retirement claim.  He successfully obtained Combat-Related Special Compensation (CRSC) benefits for two veterans with post-traumatic stress disorder (PTSD) after benefits had been initially denied.  The Air Force took down a statement on its web page that "buddy statements" should not be submitted to support CRSC claims after Jason filed a lawsuit challenging that policy.

Jason practiced administrative law for more than 30 years. Prior to entering private practice he served as a Deputy Chief Counsel for the Pennsylvania Department of Human Services. Jason provided legal services to the Medicaid third party liability section and his responsibilities included drafting statutes and regulations, along with as advising on Medicaid liens and estate recovery. He also provided advice to local welfare offices on Medicaid nursing home eligibility. Jason handled most of the Department's grant litigation with the Federal government arising out of Office of Inspector General audits and other financial reviews in major programs including Medicaid and Title IV-E Foster Care.  He handled nursing home reimbursement appeals and prosecuted program integrity matters.  Jason also handled civil service cases involving disciplined state employees. During his career with the state, Jason handled more than fifty Commonwealth Court cases and was lead counsel on more than a dozen appeals to the United States Court of Appeals for the Third Circuit.  Jason represented the Commonwealth in his private practice handling selected grant litigation cases from 2014 to 2019, and he served as a hearing officer for the Department of Health handling medical marijuana appeals.

Please note that Pennsylvania does not recognize a legal specialty in administrative law.
​

Jason is not a veteran but became interested in veterans law shortly after his retirement from state government service in 2014. Although veterans benefits have existed since the inception of the Nation, we have only had judicial review of VA decisions since 1988. Much of the law is not settled, and there is ample opportunity for lawyers with an interest to break new ground. Jason participates in the Veterans Consortium Pro-Bono Program and has received training through that organization. He is also a member of the National Organization of Veterans Advocates (NOVA), a practitioner member of the National Law School Veterans Clinic Consortium, and is accredited by the Veterans Administration. Please note that Pennsylvania does not recognize a specialty in veterans law.
​
​​Veterans who leave service with a medical disability rated 30% or more, may have dual claims for both VA benefits and military medical disability retirement benefits. The interaction between the two benefit streams can be complex with an offset required in many instances to prevent "double dipping."  However an offset is not always required and military medical disability retirement brings with it other benefits, including health care coverage.  Military medical disability retirement is also the key to receiving Combat Related Special Compensation for veterans who were injured by armed combat, hazardous duty, an instrumentality of war, or in simulated war. 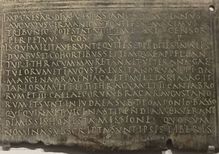 ​One important aspect of veterans law is military discharge upgrades. A veteran who receives a less than honorable discharge is often barred from receiving all or some of their VA benefits. Under a series of recent Department of Defense memoranda individuals who suffered from PTSD, traumatic brain injury, or another mental health condition during service must receive liberal consideration of their discharge upgrade requests.

​Discharge upgrade issues have probably existed for as long as there has been organized military service. Above you will see a discharge certificate - essentially a DD-214 - issued to a Roman legionnaire for service in Judea in the first century. The  certificate is on exhibit at the Israel Museum in Jerusalem. The explanation attached to the exhibit states that one copy of the decree of discharge was publicly displayed in Rome and the other was given to the soldier. Military service in the provinces was one way of acquiring coveted Roman citizenship.

In addition to his law degree, Jason holds a doctor of public health (Dr. PH) degree from the University of Pittsburgh.  He was also granted master's degrees in business administration, health administration and bioethics.  Jason is a member of the Beta Gamma Sigma business honor society and he was an inaugural Salk Fellow at the University of Pittsburgh.  Jason is certified in public health by the National Board of Public Health Examiners, a national accrediting agency for public health professionals.
​

Jason's Private Practice and His Fees

Jason accepts a limited number of Veterans' cases involving the issues discussed above.  If the case is sucessfully litigated in court, the attorney fees and costs can be paid by the Federal government under the Equal Access to Justice Act (EAJA)  If the case settles, or the Government is not liable for the attorney fee and costs of litigation, then the client is responsible to pay the attorney fees from the recovery. The client's responsibility is usually determined by using the EAJA hourly rate (currently approximately $210/hr) subject to a 20% cap, but individual circumstances may require a different arrangement as set forth in the fee agreement.  The filing fee in Federal court is currently $402.00 and the client is responsible for paying that fee.